The Working Principle of WDM Technology

The working principle of WDM technology is similar to the above-mentioned principle. Without using additional fibers, WDM technology uses a multiplexer at the transmitter to combine multiple signals together, and a demultiplexer at the receiver to split them apart as shown in the following figure, so that multiple signals can be transmitted over a single fiber cable.

That’s to say, optical signals with different wavelengths are combined at the transmitter firstly, then will be transmitted together through the single optical fiber. Finally, the combined signals will be split into multiple signals with differing wavelengths again when arriving at the receiver. In the whole transmission process, each signal with its own wavelength will not interfere with each other. Therefore, the capacity of a fiber link can be expanded by simply putting the multiplexer and demultiplexer at each end.

The Differences Between CWDM and DWDM Technology

WDM technology is very efficient and largely used that enables the capacity of the network to be expanded without more fibers. In general, it can be divided into two types, CWDM (coarse wavelength division multiplexing) and DWDM (dense wavelength division multiplexing), both of which are indispensable technologies to increase capacity on the fiber links. However, there are many differences between the two types, which vary from wavelength spacing to transmission distance.

CWDM and DWDM are divided on the basis of different wavelength patterns, while the words “coarse” and “dense” reveal the difference in channel spacing. As for CWDM, it has the capability to carry up to 16 channels on a single fiber in the spectrum grid from 1270 nm to 1610 nm with a 20nm channel spacing. As for DWDM, it has a narrower channel spacing, 0.8 nm, which is able to transmit up to 160 channels from the wavelengths of 1525 nm to 1565 nm (C-band) or 1570 nm to 1610 nm (L-band). In comparison, the denser spacing and more channels allow DWDM to transmit more optical signals over the same fiber than CWDM. For the basic difference between CWDM and DWDM, you can take the following figure as reference. 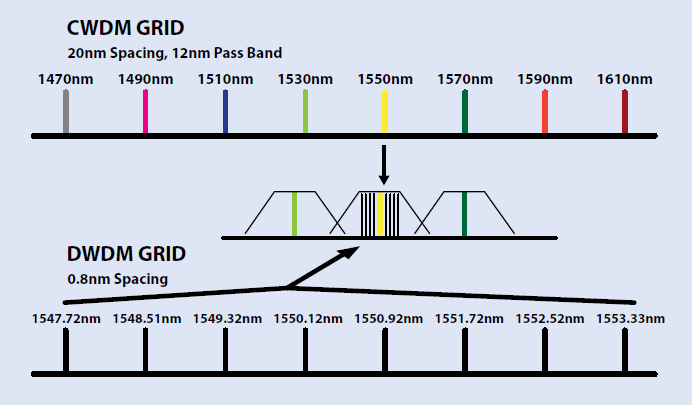 CWDM and DWDM use the same working principle to multiplex different wavelengths of optical signal via a single fiber, but differ in applications for the ability to amplify the multiplexed signals. As CWDM has no ability to amplify the signals, it is always used in short distance transmission that can support the transmission at lengths up to 160 km. However, DWDM is designed for longer haul transmission, which can expand greater maximum capacity and transmit the signals longer. Thereby, CWDM is always the first choice for short distance applications, while DWDM could be the priority for long distance transmission.

Compared to DWDM, CWDM with uncooled laser uses electronic tuning that is easier to be manufactured with lower cost. Why? Because DWDM with cooled laser is more difficult to accommodate temperature tuning due to the non-uniform temperature distribution in a very wide wavelength, which results in high cost. Meanwhile, DWDM has a much narrower channel spacing which requires more sophisticated transceiver designs. Hence, the manufacturing cost of DWDM is much higher than of CWDM. Typically, a DWDM product is four or even five time more expensive than a CWDM counterpart.

With its advantage of high-volume data transmission over a single fiber cable, WDM technology becomes more and more commonly used and plays an important role in facing the increasing demands of today’s network. Along with the constant development and maturity of WDM technology, it is divided into CWDM and DWDM that are indispensable technologies with different features. You are suggested to choose the suitable one for your network according to their features, such as, transmission distance, channel numbers.

Related to In-Depth Look at CWDM and DWDM Technology

Leave your comment In-Depth Look at CWDM and DWDM Technology