There are two types of Ethernet patch cables according to whether the cable is shielded or not, known as shielded twisted pair (STP) cable and unshielded twisted pair (UTP) cable. As for the structure of these two types of copper cables, here offers their differences in the following figure for your reference. Besides, it is worth mentioning that shielding is one of the common methods to decrease or avoid EMI, aiming at protecting the whole cabling system. 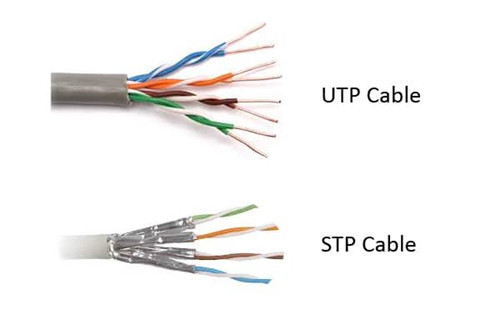 As for the STP cable, it is always made up of even wires that are shielded by a metallic substance. Just taking an eight-strand cable as an example, all the four pairs of the wires are twisted, shielded and then wrapped in another metallic protector, as shown in the above figure. Through shielding, cancellation and wire twisting, the STP cable can be well protected from interference. It is highly recommended to use the STP cable in industrial settings with high amounts of electromagnetic interference (EMI), such as factories with large electronic equipment. However, there is an important issue that should be paid attention to if you choose the STP cable to deploy Ethernet network. After installation, you should check and ensure that it is installed and grounded properly, or the shielded Ethernet cable will act as an antenna and pick up signals when your network runs.

As for the UTP cable, it is easy to learn that it is designed without shielding. Compared to the STP cable, it is much simpler to install and less expensive due to its unshielded property. But without shielding, how to reduce or avoid interference when using the UTP cable? Or this kind of cable has no ability to decrease the interference? In fact, the UTP cable depends on the twisted pair inside the cable to cancel EMI. Meanwhile, it does not require as much maintenance but can transmit data as fast as the STP cable, since it don’t rely on the outer shielding. As for its application, it is always used in domestic and office Ethernet connections, and in any area where there is not a high degree of EMI.

The solid and stranded cable with different features are designed for various applications. Knowing their features and acquiring when and where they should be used will be helpful for you to improve networking performance and efficiency when designing your network. The following will introduce the structure and advantages of these two kinds of copper cables, then you can have a good knowledge of which should be selected and used for deploying your network.

As shown in the above figure, the solid cable consists of a single, solid conducting wire, insulated with non-conductive materials. With the feature of large-diameter wire, it is physically stronger than the stranded cable and capable of remaining stable over a wider range of frequencies, providing superior electrical characteristics and supporting long transmission with high data rates. Meanwhile, it has a lower DC resistance and a lower susceptibility to high frequency effects than the stranded cable due to its large-diameter wire. All these advantages make the solid cable better suited to the new and emerging high-speed Ethernet applications. However, the large diameter feature of solid cable brings a serious disadvantage at the same time. It could be easy to be break for lack of flexibility as they cannot be flexed or bent for many times without breaking. Hence, the solid cable is an ideal solution for horizontal cabling applications with long transmission distance.

Greatly different from the solid cable, the stranded cable is composed of a bundle of twisted, small gauge wire strands. Its diameter of each individual wire strand is much smaller than that of the solid cable, making it much more flexible and hard to break even if it is repeatedly flexed or bent. Although the stranded cable is not so reliable as solid cables for long distance transmission, it features high flexibility that makes itself easy to constantly plugged, unplugged, bent or installed without harm or risk of performance failure, as an optimal choice for short distance transmission.

From this paper, we can learn four widely used types of Ethernet patch cables with different features that are suitable for different applications. The STP cable is always applied in industrial settings with high amounts of EMI, while the UTP cable is more commonly used in domestic and office Ethernet connections, and in any area where there is not a high degree of EMI. If you want to establish a horizontal, long-distance network with high reliability, the solid cable is strongly recommended. But if long distance is unneeded, you are suggested to use the stranded cable which is a good choice for short distance transmission with high flexibility. In short, choosing the most suitable Ethernet patch cable to deploy your network that can greatly improve your network performance and extend life span of your equipment.